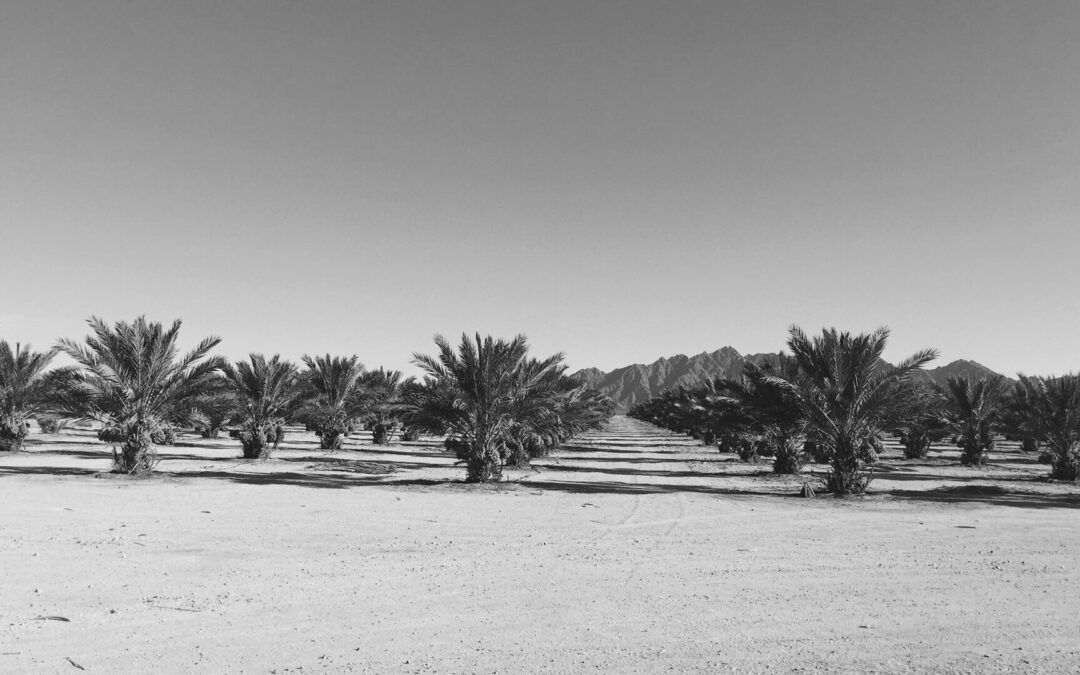 The Medjool date has been a tasty favorite throughout history. Prized for their sweetness and versatility, people have gone to great lengths to ensure their survival.

A bit of Medjool Dates History

Our ancestors sure knew a thing or two. Dates have been cultivated by humans for more than 6,000 years, but were introduced to North America in the 1700’s by Spanish missionaries. The origin of Medjool dates, however, is more recent. Medjool dates are indigenous to Morocco, but were brought to Nevada in 1927, where eleven cuttings stood in quarantine for seven long years. Of those original eleven, nine survived, and in 1935 were taken to California where twenty-four offshoots were planted. These unlikely beginnings were the basis of all the Medjool dates that are now planted in the United States – kind of crazy to think about! But if those original date farmers were anything like us here at Naked Dates, their dedication and sheer stubbornness is what ultimately ensured the survival of this most unique and delicious fruit.

America’s romance with dates began around the turn of the 20th century, when ‘Agricultural Explorers’ were sent out by the US Department of Agriculture to discover new crops to bring home for domestic production, which is how fruits like avocado and many exotic citrus varieties came to be here. One of the founders of the program, one David Fairchild, was at the time fascinated by Middle Eastern culture, having read stories of Aladdin, Sinbad the Sailor, Ali Baba and his Forty Thieves, and of course One Thousand and One Arabian Nights. He traveled to Baghdad and Algeria, connecting with a friend who studied date farming in the region, and discovered that the growing conditions there were very similar to those of the Mojave Desert of Southern California.

The trouble was, it was nearly impossible to produce a viable date palm from seed. They needed instead an offshoot, or cutting of a parent tree in order to propagate. To compound the complexity of the operation, these offshoots weighed about sixty pounds or more, requiring a lot of labor in order to bring them home. Once the deed was done, however, the dates thrived. Farmers couldn’t get enough, and they eventually had to send over another team to collect more cuttings from Persia, Iraq and other locations in the Persian Gulf. The journey itself was plagued with disaster, but typhoid fever, massive storms at sea and being shot at on a regular basis did not deter the intrepid date-seeking adventurers. Eventually they arrived back home with their cargo intact: seventeen freight cars packed full of offshoots traveled over land to arrive in California, resulting in the first commercial plantings of dates in California. It was 1911.

America’s Enchantment with the Date

During this time and beyond, America had a strong fascination with Middle Eastern culture. Movies like Cleopatra, The Sheik and The Queen of Sheba were all the rage. Upon the discovery of Tutankhamun’s Tomb and the revelation that he was buried with treasures that included – of all things – preserved dates, demand for the candy-like fruit was on the rise. Savvy date farmers at the time played upon the public interest with Arabian Nights-themed date festivals and exhibits all through the growing area. It wasn’t unusual to be served at an area store by somebody dressed as a genie, or at the very least wearing harem pants or a bolero. With a carnival-like sensibility, some made an attraction out of the hand-pollination of the date palms, encouraging visitors to experience the “Romance and Sex Life of the Date”, in which farmers waved male date palm fronds at the female plants in order to pollinate them.

You’ve probably heard that phrase – nothing good comes easy. This applies to a lot of things in life, but in the context of date farming the phrase takes on a whole new meaning. It’s really a year-round job, and interestingly enough in this age of technology, we still do most of the farming by hand, including pollination. The process has several stages, beginning with the collection of pollen from the male trees. When the female trees begin to flower, we hand-pollenate them a minimum of three times between February and May each year. Around that time, the tree begins to produce buds, which we will start to thin out in order to encourage even ripening and maturation. Contrary to what you might think, thinning out the dates does not mean that we lose on yields. By dropping fruit, we encourage the remaining buds to grow larger. In the end, the weight of our crop is about the same, but the dates themselves are larger in size. During the time most of the hard work is taking place, the temperatures in the date groves are often higher than 100˚F. Hot stuff, but well worth the effort, we think!

Everybody loves dates: those chewy, gooey-sweet morsels that are the epitome of yummy love. If you’d like to learn more about our dates or date products, drop us a line or come for a visit to discover some of the unique date products we only sell through our farm store. We ship our organic Medjool dates anywhere, and they are always a welcome treat at any holiday gathering. Browse our selection or give us a call for special orders. From our family to yours, why not make Naked Dates part of your family tradition.