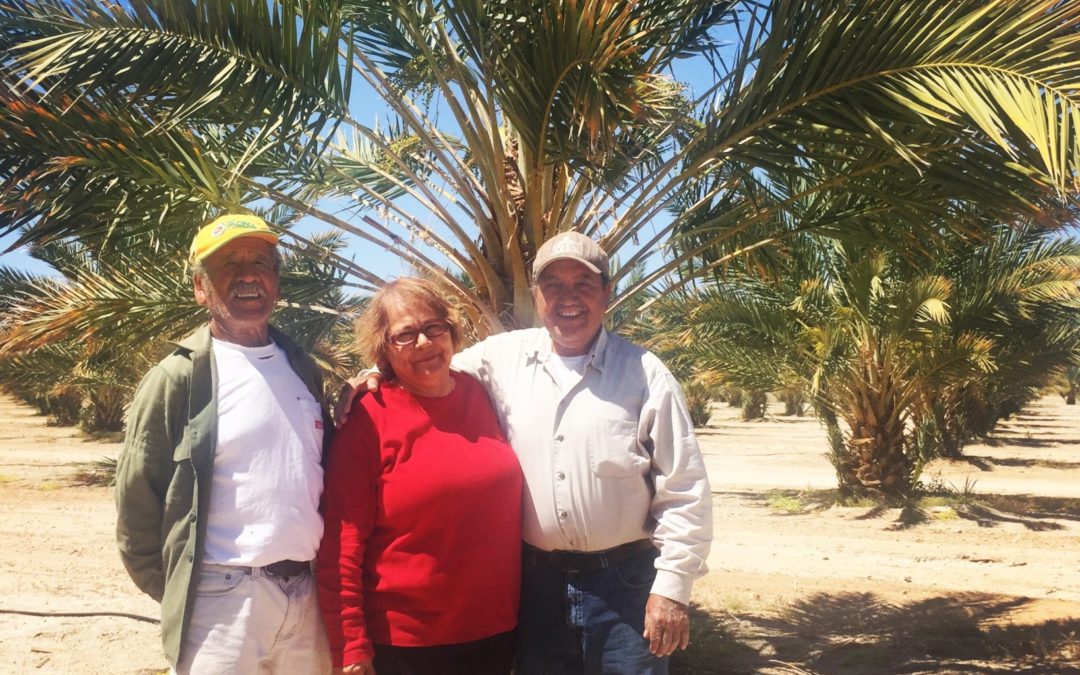 Our Palmeros (the people that work the palm trees) are the lifeblood of Naked Dates: they are the people who tend the date palms, and make decisions on how and when certain work is done over the course of the season. As with any type of agriculture, timing and care are very important. Being able to read the signs the trees are giving us, and being able to act on these indicators is what sets our quality apart from all our competitors. We are so lucky to have Diego, Champion, and Margarita to lead our team. We feel like we’ve been blessed with a rare gift, and we are thankful every day.

Diego and Margarita are married, and have four children and eleven grandkids, the product of a true-love-at-first-sight story: at the age of 25, Diego owned a tortilla factory in Cuervitos, Mexico (just south of Algadones), and knew as soon as he saw the 16-year-old Margarita that she was the girl for him. He used to drive by her house in his ’57 Chevy, and hearing his car coming, she would go outside to water the dirt (hahaha), just to have an excuse to see him. He asked her out for the first time on April 5, 1970, and the rest, as they say, is history.

Before becoming a Palmero, Diego worked in citrus. He was always drawn to agriculture, and is very passionate about the work he does. As an irrigation specialist, his expertise was depended on by his employers, which included Steve Flood, from whom we bought much of our equipment, upon his retirement, for the Naked Dates farm in 2011. Prior to working for Mr. Flood, Diego and Margarita were living in Indio, but their house got broken into a few times, so they decided to move to Somerton, which is when his journey as a Palmero began. He proved his worth almost immediately, advising Mr. Flood that the date trees needed more water. Steve replied that they were desert trees and did not need more water, but Diego insisted, and soon they began producing superior quality dates the likes of which has never been seen in the area.

Over the years, Diego became an integral part of Mr. Flood’s operation, and he was promoted through the ranks to eventually become foreman, which is the position he currently holds at Naked Dates. Diego worked for Steve Flood for 26 years, with Margarita working at his side for 25.

Margarita has been known to say that she wishes she was a palm tree, because that’s where Diego directs all his attention: he even calls them his niñas (little girls)! The first year they were working on the Naked Dates farm and the trees bloomed, he was so excited, he ran home to wake Margarita to share the news. It was about 5:30 in the morning, needless to say she was not as excited as he was.

Diego’s passion for the date palms is legendary. We have found him to be a workaholic, and that he never stops thinking about the trees. When his kids are around, they say that’s all he talks about – they do tire of it, but that’s just the way he’s always been. They credit him for instilling in them a valuable work ethic and integrity, helping them to appreciate what hard work is all about. They will be the first ones to admit that younger guys just can’t keep up with him – and this is very true, not just for Diego, but for Champion as well.

Diego loves the smell of the trees and irrigation in the mornings – it invigorates his senses and prepares him for the day ahead. When he’s not working, he likes to spend time with family. Oftentimes, they will have family get-togethers with all the kids and grandkids where they BBQ, drink, visit, and be merry. Life is good when you’re surrounded by love.

Diego has always had a natural understanding of the Medjool Date Palms, and has done lots of research when needed to refine his craft and advance his skills. Mr. Flood would oftentimes refer him to various books and articles, and Diego would digest them and apply what he had learned to make the process more efficient and productive.

Champion (real name Alfredo, but he is Champion to everybody who matters) is 76 years young, and has a wife named Maria, with whom he has 9 children. Champion got his name from his days riding the bus in Mexico. When the bus stopped, the men would get out and buy beer. Whoever could drink beer the fastest got their beer bought by the slowest drinker – and guess who always won? That is how he got his nickname.

Champion used to work in the broccoli and lettuce fields. Diego heard about Champion, and that he wasn’t afraid of heights, so he went out and snatched him up. They’ve been working together ever since. Champion worked for Steve Flood for 21 years before signing on with Naked Dates.

Both Champion and Diego are very hard workers. It’s hard to find workers like them, who work to their standards of quality and tenacity. One time, another worker told Champion to slow down, saying “we get paid by the hour!” to which Champion said: “I get paid to work!” This should tell you a lot about Champion.

Our farm is our extended family, and we wouldn’t have any of it without Diego, Margarita and Champion. We always smile when we hear Diego’s favorite exclamation: “Ay Chihuahua!” Being a Palmero is a craft, and is not something that just anyone can do. It takes years of experience, of knowing the trees, knowing what they need and what they want, knowing when to be delicate and when to be forceful. Diego leads our team in producing the best organic Medjool dates you have ever tasted – and we’re not saying that just because they’re ours. Kase and I are often told that our dates are the finest that people have ever had, and Diego said that he heard that often when he worked for Steve Flood as well. We know that this is directly attributable to all the love and care that Diego, Champion, Margarita, and their team puts into the trees. Beyond the farm work, Diego understands very well the value of customer service, and that if people like the product, they will always come back.

So if you’ve never tried our healthy Naked Dates, the time has never been better! Now that you can put some faces to the flavor, why not try some today? And remember to come visit if you’re in the area – our farm store is open from November through March, and Diego, Margarita, Champion, Kase and I will be here to show you around. In the meantime, you can shop online and discover the Naked Dates difference with the convenience of home delivery. Sign up for our e-newsletter today, and be the first to find out about specials and promotions offered through the year. Until then … work hard, live simply, eat naked!